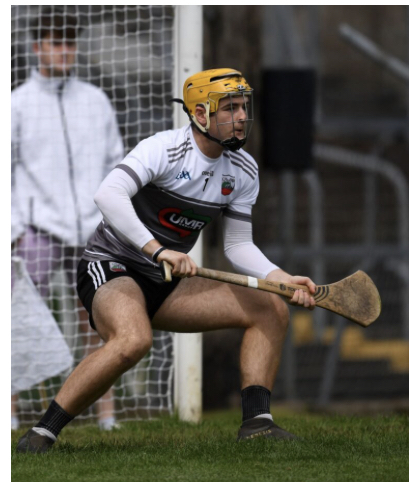 CLARECASTLE LED by heroic goalkeeper Cian Broderick fought off the challenge of Whitegate to consolidate their senior status for 2023 and relegate Whitegate to the intermediate ranks.

Nervous tension filled the air in the cauldron like amphitheatre of Dr Daly park before the throw in as Senior status was on the line for these two great clubs.

Tension wasn’t on display by the players though as patrons were treated to a first half of immense quality and drama. Superb scores, terrific tackling and outstanding goalkeeping were a constant theme for that action packed first thirty.

Whitegate raced into a two point lead after only two minutes with a superb Conor Whelan point straight from the throw in quickly followed by a Paddy Burke score.

The Magpies settled though and Stephen O’Halloran landed an incredible touchline point, his first of four from play in a vintage display of wing back play. After ten minutes Clarecastle led six points to four before Whitegate began to open up the Clarecastle defence with neat slick fast interplay.

However their decision making let them down as they opted to shoot for goals rather than tap over the easy point and then conversely they tapped over when a simple handpass inside to a free man would have given them the easiest of goal opportunities.

Andrew Fahey then produced a fantastic save which seemed to ignite a goal keeping performance for the ages from Clarecastle’s Cian Broderick who simply put was mesmerising stopping no less than seven goal chances.

In the 20th minute Conor Whelan bore down on goal only to see Broderick pull off a reflex save, the ball was worked to Paddy Burke who unleashed another bullet with Broderick yet again standing defiant. The sides traded scores and with Clarecastle leading 0-13 to 0-11 as half time approached Broderick yet again was magnificent this time denying Paul Burke.

In the 39th minute though the marvellous new stand in Tulla erupted when Eoin Quirke embarked on a blazing run before superbly offloading to Paul Burke who blasted home from close range for the game’s only goal. At this juncture there was only the bare minimum in it with Clarecastle leading 0-17 to 1-13 but all the momentum was firmly with Terence Fahy’s side.

When the need was greatest though Clarecastle responded magnificently digging deep with another superb O’Halloran point and a Rory O’Connell score who it must be said gave his best ever display at senior level. The drama wasn’t over though as Ronan Hayes fired a rocket from twenty yards that seemed destined for the top corner only to see Broderick miraculously dive full length to somehow get a touch, a save that can only be described as outrageous.

Whitegate kept battling and Broderick again denied them when saving from Conor Whelan. Late scores from Bobby Duggan saw Clarecastle over the line in a contest that was pulsating entertainment to say the very least.

Best of luck to the U21B Footballers in the Quarter Final...

U21 Hurling County Championship Quarter Final Win A one p...

Best of luck to the U21A Hurlers in the Quarter Final v. ...

The Camogie &amp; LGFA AGM will take place in the clubhou...